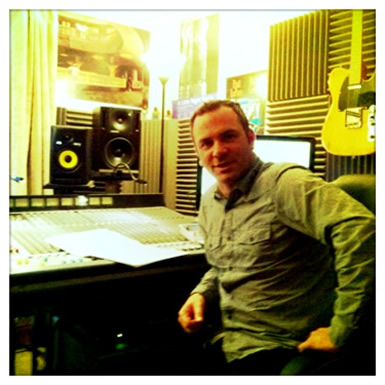 Damian has written music for many high profile productions, including Michael McIntyre‘s Hello Wembley and Dara O Briain‘s This Is The Show.

In 2015 he composed and produced his first BBC Saturday night primetime theme tune for The John Bishop Show, this was hot on the heels of BBC2’s Jack Dee’s Election Helpdesk.  Working closely with theatre director Matt Aston has seen Bombers Moon transfer to the West End (Trafalgar Studios) and a world premiere of Peter Quilter’s 4000 Days at the Park Theatre.

While studying in Nottingham, Damian composed for many contemporary dance and theatre shows and two short films for ITV and Channel 4.
He subsequently become in-house sound designer at Nottingham Playhouse. His association with comedy came after performing alongside Rich Hall in 1998. Damian and Christian Reilly’s band Novalounge, championed by Just The Tonic promoter Darrell Martin, were teamed up with Rich for his Otis Lee Crenshaw Show.

After touring the world the show won the Perrier award in 2000 and Damian played bass, guitar, co-wrote and co-produced the Universal CD & DVD release ‘London not Tennessee‘ which broadcast on BBC2 in 2002. He has played in many bands, notably alongside Robyn Hitchcock, Flight of the Conchords, Men at Work’s Colin Hay and Bill Bailey.

In 2004 he reprised his role on the second Otis Lee Crenshaw CD How Do We Do It? Volume!. Damian performed on Richard Herring‘s Radio 2 comedy That Was Then This Is Now in 2004, and after scoring and sound designing a number of short films and theatre shows, including John Clancy’s Fringe First winning Screwmachine in 2005, he was commissioned to compose theme tunes for BBC Radio, including Shappi Talk and Jason Manford and Friends.

In 2009 he wrote a feature length score for the 1921 silent movie, Tol’able David, which was performed live by a small ensemble alongside the film at the Barbican Centre and at the British Silent Film Festival.

In 2010 he teamed up with Made In Dagenham writer William Ivory as the sound designer for the second of his trilogy of plays Bomber’s Moon.
2010 also saw his theme tunes on Channel 4’s Comedy Gala and Stand Up For The Week and BBC 3’s Edinburgh Comedy Fest Live as well as the opening song on Kevin Bridges‘ The Story So Far.