Theatre Review for Hound Of The Baskervilles

Theatre Review for Hound Of The Baskervilles 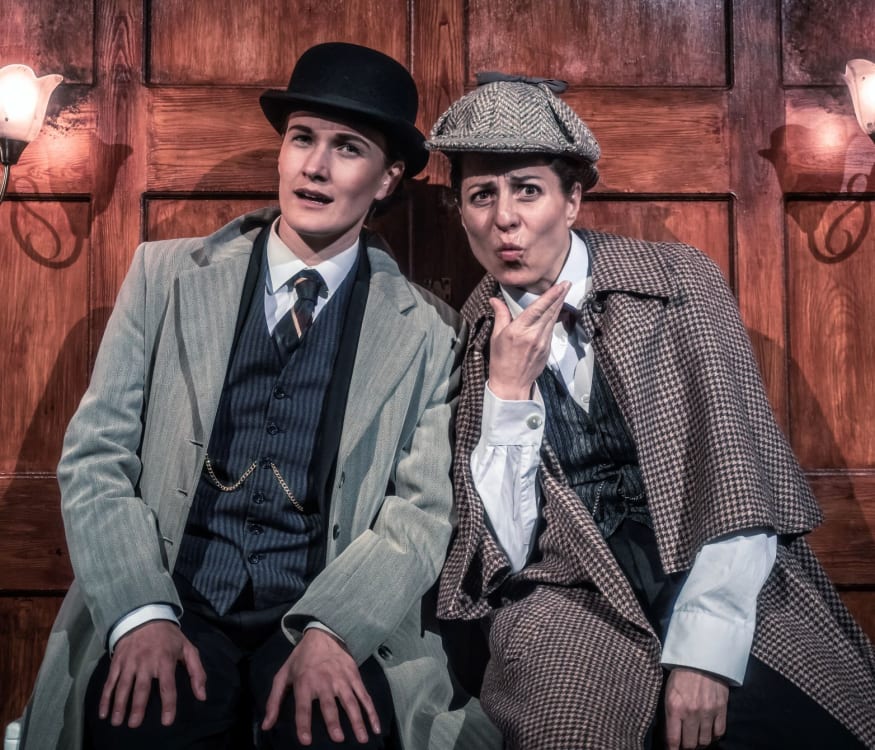 Beverley’s East Riding Theatre’s spring show is a re-telling of the classic Arthur Conan Doyle story The Hound of the Baskervilles, adapted by Steven Canny and John Nicholson. Originally performed in 2007 by Peepolykus Theatre Company, this particular adaptation is a farce (think National Theatre of Brent rather than National Theatre) reliant on fast-paced physical comedy and supremely efficient ensemble playing. Forget the horror and suspense of the novel and the movie versions, this is purely for laughs.

Adopting a ‘play within a play’ style, the cast warn us in the first few minutes not to continue watching if we suffer from a heart condition, a nervous disposition—or low self-esteem! The three actors then introduce themselves and each other with varying degrees of mock self-aggrandisement. The tone is set for a playful send-up of the Victorian melodrama treating us to an evening of skilful, but uncomplicated fun.

A challenge of such an adaptation is that a cast of three must play a multiplicity of characters in a variety of different scenarios. This, in itself, provides an opportunity for broad comedy, as the company create a series of grotesque caricatures with some truly (deliberately) terrible wigs and beards. The vast gamut of comic stereotypes is on display here, from the pipe-smoking deer-stalker wearing Holmes to limping yokels with all-purpose west country (ish!) accents.

All members of the cast (Mariana Barbera, Annie Kirkman and Mark Conway) are on great form, providing some laugh out loud moments of verbal and physical humour under the taut but imaginative direction of Marieke Audsley. The high energy and split second timing of the playing, although fun to perform, relies on a highly developed sense of trust, which is clearly on show here.

They are supported by a wonderful soundscape and music by Damian Coldwell. Overdramatic chords, creaking doors, howling dogs and some luscious piano accompaniment help to generate the world of mock melodrama and silliness. ERT has always had excellent design teams and this production is no exception. The set designed by Amy Watts conveys the world of Victoriana whilst being adaptable enough for its many settings and Jessie Addinall produces some exceptional lighting effects in the design—particularly in the first moments of the play with the death of Sir Charles Baskerville.

Where the production struggles is in the script, which is simply too long for its own good. After a time, the send-up genre begins to pall and, whilst there are, undoubtedly, laugh out loud moments, there are too few of them. It’s an enjoyable evening but the convoluted and laboured plot doesn’t serve the style of the piece deftly enough. It would be difficult to advise the actors to pick up the pace when, clearly, they are working their collective asses off.

As the run of the play progresses, and early performance nerves ease, it may be that the company can do something about the running time, but at 2 hours 20 minutes—including the interval—it felt too lengthy. Nonetheless, it’s worth seeing for the comic skills of the cast and the admirable production values.

Previous ERT Hound of the Baskervilles review
Next